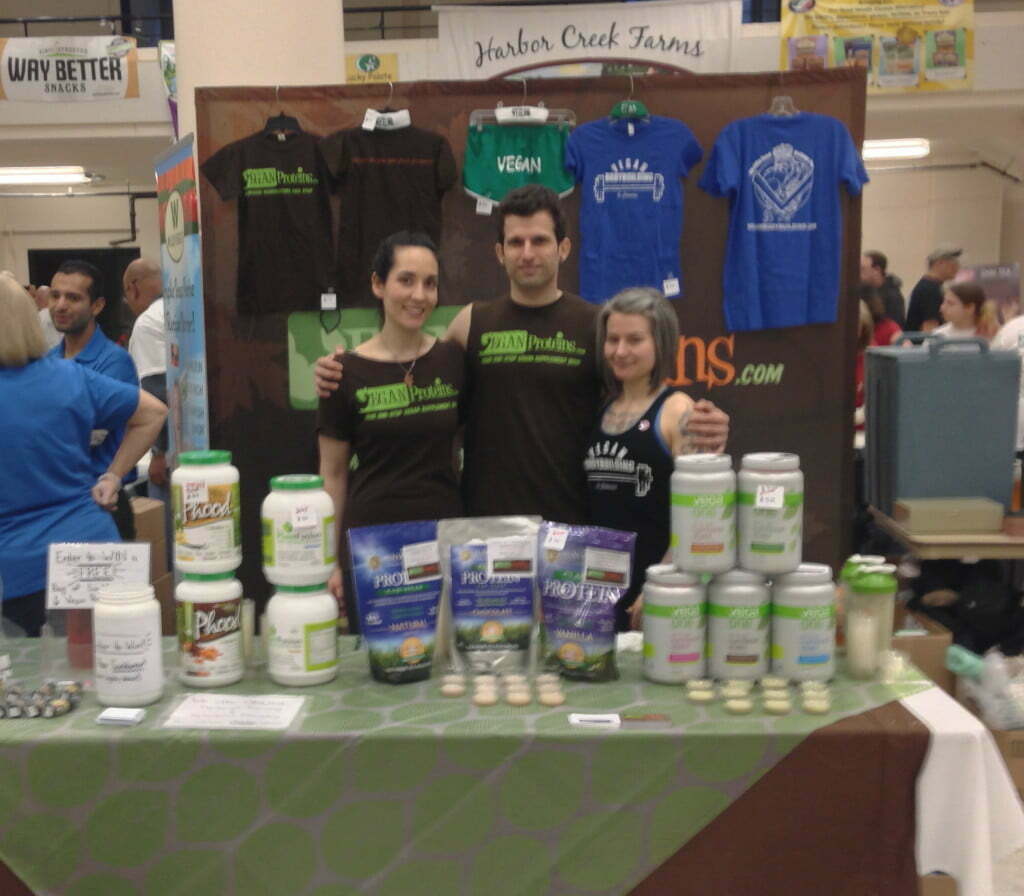 Sorry for the bloggy silence this week.  We’re just getting ideas about how to make regular updates happen while we are on the road this summer.  This past weekend we flew from Massachusetts to Seattle for the Seattle Veg Fest, which was the first show that we ever did!  This was our fifth year there and it was kind of remarkable to think about how we have grown since then.  Here are some of the highlights of the trip.

Our flight was actually at 3 in the afternoon, which meant that for once in our lives, we didn’t have to get up at the crack of dawn to fly!  We got to eat breakfast, clean the house (so it would be clean when we came back), take a bath (!!!!), and head out in the early afternoon.  I always like to pretend that I am someone important when I fly, even though I have never once flown first class and usually end up sitting next to the bathrooms.  Actually true story here, Giacomo and I had seats that were in the 18th row, so I was like “oh, we’re not next to a bathroom! Yay!”  Sure enough, there was a bathroom halfway down the plane, directly next to row 18.  I tell you, we can’t win. 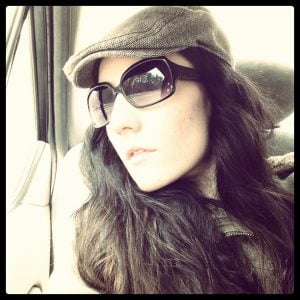 I really hate flying, but I do love airports. Love them!  I don’t know why.  There is nothing really nice about them and they are mostly all the same.  But something about them really makes me excited.  I love to walk through as many terminals as I can before we have to board, and I love checking out what they have for vegan options.However, right now, I am eating no sy and no gluten and that makes airport food MUCH harder to find.  I managed to find some non GMO popcorn that was delicious, but I also brought a couple of these bars that Robert Cheeke sent to me from Expo West, and I have to say that they were delicious!  Really clean, whole food ingredient lists, and each with a unique ingredient or two (These ones had Yerba Mate!).  I like them so much that we just might carry them. 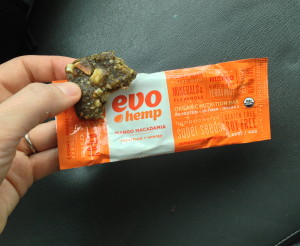 [half] When we got to Seattle, it was about 10 pm, west coast time, and we were picked up by Sara Russert of Lean Mean Vegan Machine, who is a good friend of ours and also a client of mine, whom I am coaching for the Plant Built Bodybuilding show in July (blog soon to come about this!).  She has worked with us at the Vegan Proteins booth for 2 (maybe 3?) years now and was awesome enough to let us stay at her place for the weekend! She even gave us her bed, and her friend and in-person coach, Trevor, pretty much lent us his car for the weekend.  I’m just saying, awesome people all around.  She also has the sweetest Pitbull on earth named Blanche, who pretty much instantly won our hearts. [/half] [half_last] [/half_last]

After staying up late on Thursday night, we went to bed knowing we had to set up the Vegan Proteins booth the following day for the weekend.  We realized while we were setting up that we may not have had enough space.  Oops.  We have a lot of stuff to show people!!!

Here is the booth, just about set up.  It’s tight, but we made it work. 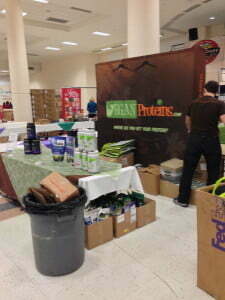 We went home to fuel up before the gym.  I don’t remember exactly what I ate, but I remember a mango that Blanche desperately wanted from me!

Giacomo and Sara made a simple yet delicious lentil and vegetable stew that made the hallway of the whole building smell delicious!

[half] At the gym, I was pretty much blown away by Sara, and how far she has come in such a short amount of time.  I am her coach/trainer, and I knew she was strong as we have been communicating workouts via email, but it is entirely different to actually see it in person.  Her dedication is remarkable and really shows what you can do if you put your mind to something 100%. It was chest/triceps day for her, and I helped spot her through her sets, but to be honest, she didn’t need much spotting at all. She is insanely strong, and if she keeps at this, I think she can make a BIG name for herself in the land of Vegan Bodybuilding. 😉 [/half] [half_last] [/half_last]

Getting a photo of her doing dips was hard because is such a dynamic movement, but you get the picture.  This was a warmup set, which I think she followed up with a 50 pound dumbbell in between her feet. Men stare.  It’s awesome. 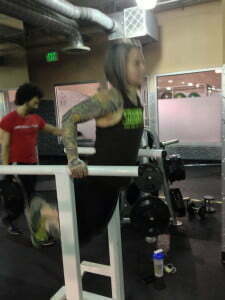 While she worked out chest and triceps, I worked out legs and shoulders before going upstairs in her very cool gym to get in my miles on that good ole treadmill.  But first, a quick picture before I’m a sweaty mess. 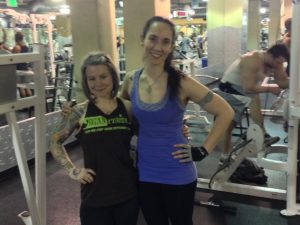 Giacomo and Sara together!  This is such an awesome picture, I love it!

[half]My run was only 3 miles, but it was MUCH harder than usual for some reason.  The next night I realized that it may have been a treadmill that wasn’t working well, but either way, a hard workout is a hard workout and I will take it![/half] [half_last] [/half_last] [half_last]The next day was show time and I think we rocked it!  Not a lot of pictures from the actual show because we spent so much much time talking to people interested in plant based nutrition!  They estimate that about 19,000 people come through this Veg Fest, and from the looks of it, that is about right.  There are just swarms of people.  God help you if you have to go to the bathroom.  It is not a fun crowd to get through.  Haha.  We met a lot of people who were really cool and excited about what it is that we do.  We got to help educate quite a few people who have questions about one protein vs. another.  We got to try the Chocolate Caramel flavor of Phood and the flavor was SPOT ON!  So, all really exciting things.  We only had a few nasayers who wanted to have an argument.  I actually took down someone’s email to send them some articles about whey protein and why it sucks, but I lost it. 🙁  So, I think I will just do a blog post about it and hope that he (or others like him) see it.[/half_last] [half] 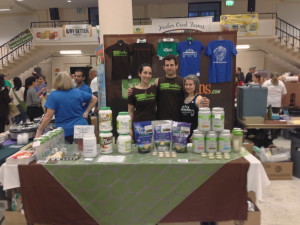 One of cool things that we got to try that all three of us fell in love with was Kevita, which is a probiotic drink. It is fizzy, like a soda, but had no sugar, and no vinegar-y taste, which I don’t necessarily mind, but I know a lot of people do.  Each of us had different favorites, but mine was the lemon cayenne one.  It wasn’t really spicy, but it was pretty warming once you actually drank it.  This stuff is delicious, and they only have 10-20 calories per bottle, depending on the flavor.

I also really loved these delicious treats and look forward to seeing them hit the east coast.

Quick shot of Sara showing off her awesome back and arms.  We had fun cutting up her Vegan Proteins T Shirt to make this muscle shirt.

After the show we headed to Veggie Grill for dinner where we each had something delicious.  I was able to find a delicious gluten and soy free dinner of vegan nachos and a side salad which had quinoa and a chipotle ranch.

Sara had some kind of buffalo “chicken” salad that looked amazing!!!

[half]The next morning before we headed out to out flight, we hit the gym one more time.  I was just running and there was this GORY movie on the TV (I later realized it was Splinter), that I just couldn’t believe was playing in a gym in broad daylight, but at the same time, I couldn’t stop watching.  It made my workout kind of fly by, but I also wanted to throw up.  Haha.  I did notice this sign which I liked.  Although I am not a big fan of Dole in particular, I was happy to see an ad for a piece of fruit in a gym, which are usually plastered with scary supplement ads.[/half] [half_last] [/half_last] [half] [/half] [half_last]

We also stopped at Whole Foods before our flight while Sara did her catering job, delivering healthy Veggie Platter to an office (how cool?).  I love looking in grocery stores around the country.  Nerdy, I know, but I love it.  I was going to leave with just my hot sauce and chapstick (things I pick up in every city that we go to), and then I saw this.  *Cue angels singing* A display of vegan, gluten free treats by a Seattle company called Flying Apron.  I grabbed a chocolate chip cookie, and then grabbed a peanut butter ball, and a pecan cinnamon bun. [/half_last]

As I was walking to the register, I realized how weird and gluttonous my purchase looked and quickly grabbed a running magazine to read on the plane, as if to say “hello cashier, I know I look like a fat ass about to inhale three large pastries, but worry not, I am an athlete, and plan on using these for fuel.”  The cashier could not have cared less, but I did have a good time reading that magazine on the plane anyway 😉 Hot sauce was confiscated at the airport because we forgot to check it.  Oops.  Then we flew home, and slept like babies.  Seattle was a success.