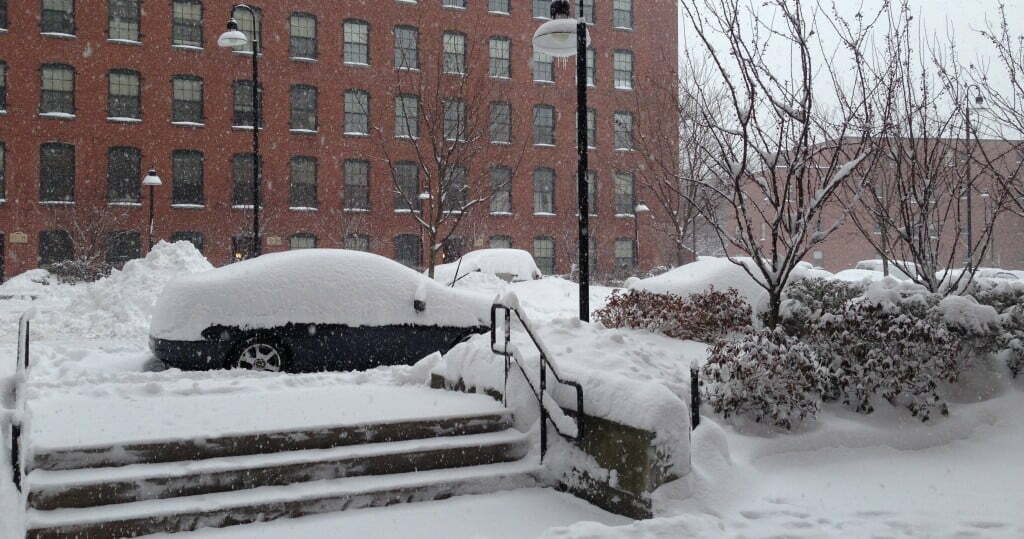 Snowed In and Loving It

I was super pumped for my bar shift last night.  Fueled up, walked in and stocked the bar full tilt.  And here is what happened

It was literally, one of the slowest shifts that I have seen in at LEAST six months.  Naturally.  I managed to get a lot of cleaning done though.  Driving home was much snowier than it was when I went in.  But when I woke up this morning, it was a wintery wonderland.

Seriously wintery. I was supposed to take my sister to an appointment, but was not about to go anywhere in this weather.  However, her phone was not working, so, after a big bowl of peanut buttery quinoa, I had to drive to her house to tell her that I couldn’t take her to her appointment!  Cut to me getting my car stuck 4 times in the 1 mile to her house.  It was kind of comical.  It’s always funny to get stuck in the snow when you are driving approximately 8 miles per hour.  I got to her though, and picked her up and brought her back to my house where we have been laughing abundantly at The Big Bang Theory.

In light of not being able to get to the gym today, I have a busy workout schedule tomorrow.  There will be yoga, running and bicep and triceps.  Weather being no match for the Giacomo, he is out snowboarding right now, and may go again tomorrow.  I always wished that I had some winter sports that I enjoy, but I have just never learned any!  Oh well,

So overall, it has been a lazy kind of a day.  The kind of day that stops you in your tracks but you don’t mind it too much.  I am supposed to go see the comedian Ron White with a friend tonight, so that should be a good time.  Everything that man stands for, I am totally against.  Smoking, getting wasted, guns, death penalty etc, but for some reason he cracks me up.  It’s good to not take everything too seriously.  Hopefully it turns out to be a good night.